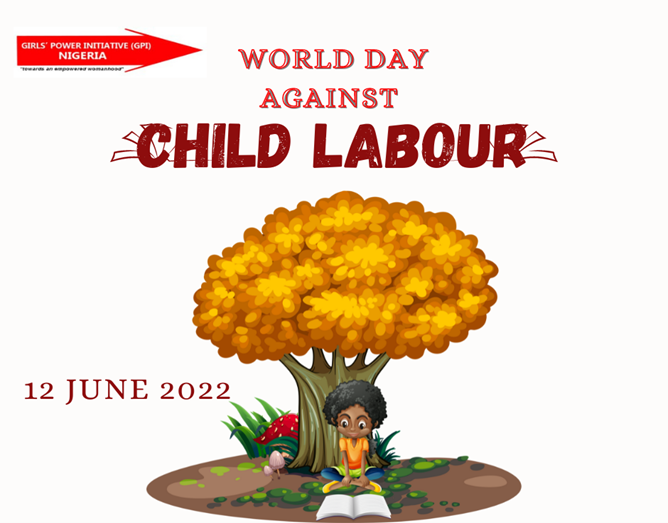 by Inikpi Rachael Salhu. “Child is meant to learn not to earn” this was captioned on a banner held and displayed by a group of Indian children celebrating WORLD DAY AGAINST CHILD LABOUR. This caption in its simplicity is the cry of many children in the world today. All over the world, children are constantly engaged in all kinds of paid and unpaid labour that oftentimes may not be immediately harmful to them. Even so, they are still considered to be child labourers since they are either too young to work or are engaged in risky activities that could jeopardize their development in terms of their physical, mental, social, and scholastic well-being. More than two out of every six children between the ages of 5 and 17 who live in the least developed nations are subjected to child labour that is harmful to their development and health.

According to the UN estimation, at the beginning of 2020, 1 in 10 children aged 5 and over was involved in child labour worldwide summing up to an estimated 160 million children, i.e. 63 million girls and 97 million boys.

The 2022 theme of The World Day Against Child Labour as declared by the United Nations (UN) is UNIVERSAL SOCIAL PROTECTION TO END CHILD LABOUR of which the UN had made it clear that this year’s theme is a call for increased investment to create strong social protection floors and safeguard children from child labour, demands for more investment in social protection systems and programs.

The prevalent issue of Almijiri in Nigeria is, unfortunately, another form of child labour and although this is not meant to be so we can no longer look past or deny the ordeal of the young Almajiri children who are most dominantly found in the northern parts of Nigeria. The Almajiri children are left at the mercy of the care of a total stranger who cares little or doesn’t care at all about their particular welfare. The young children are sent to the streets to beg for alms and engage in laborious activities such as carrying heavy loads for strangers, throwing trash, etc all these just for miserable stipends that can’t even serve breakfast talk more of lunch. That’s, to say the least as most of these children sleep in gutters, roadsides even under bridges just to take a nap or to rest for the night. The plight of the Almajiri child is almost likened to that of a stray.

The good news is that all hope is not lost as reports show that over the past 20 years, tremendous global progress has been made in eliminating child labour (ILO and UNICEF 2021). Between 2000 and 2020, the number of children working as children fell by 85.5 million, from 16.6% to 9.6%.

There is a great stride in eliminating child labour and together we can achieve almost if not total elimination of child labour thereby making sure that all children enjoy their young age and live freely as children, provided with adequate quality education and social amenities for proper physical and mental growth.
Almajirichild labourChild rights